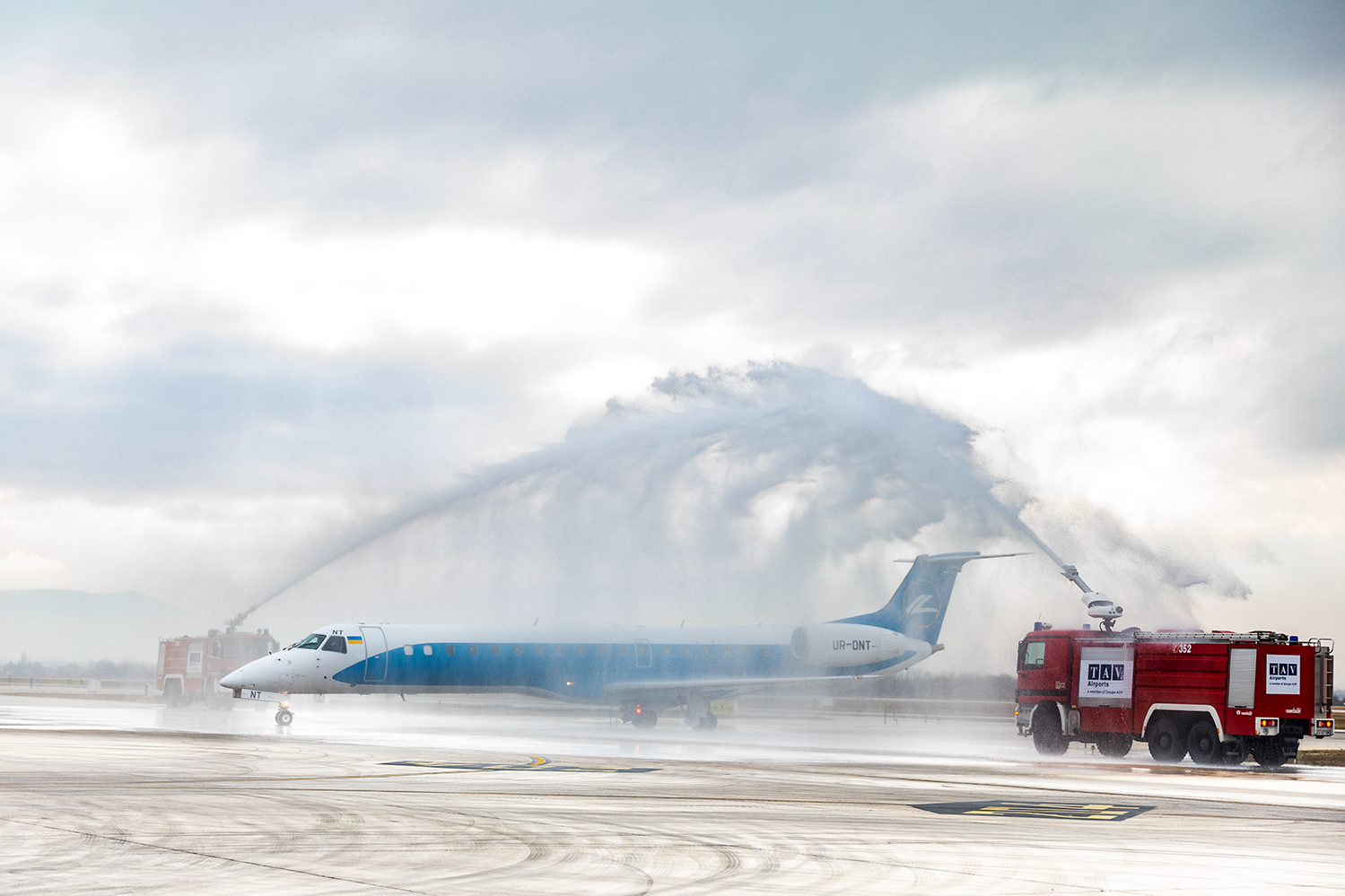 With a traditional aviation welcoming ceremony for the 1st arriving flight from Kyiv at Skopje International Airport at 12h, TAV Macedonia marked the opening of the new regular route Kyiv-Skopje by the Ukrainian airline Windrose.

The aircraft from the type Embraer 145 departed from the Ukrainian capital this morning at 9:50 o’clock carrying 72  50  passengers and arrived at the Macedonian capital at 12 o’clock (noon time), connecting the two capitals in just 2 hours and 10 minutes. 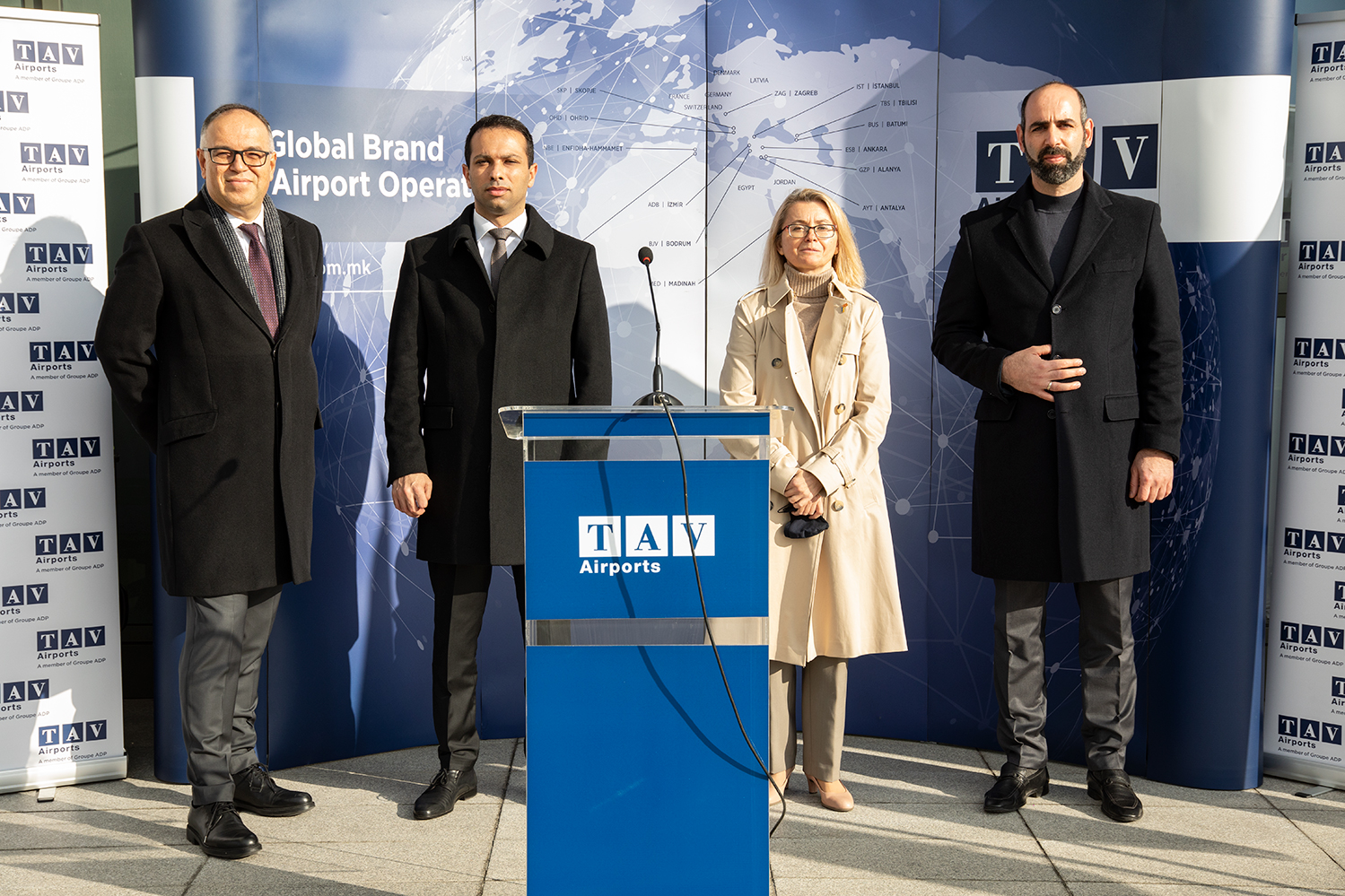 “As TAV, we are very happy and proud that we’ve welcomed the 1st Windrose flight from Kyiv at Skopje International Airport, celebrating the launch of the new regular route Kyiv- Skopje, which is not just the first positive step towards Macedonian air traffic’ recovery amid Covid-19 pandemic, but also a historical milestone for the Macedonian aviation, since Macedonia and Ukraine are connected by air for the first time in history. The entrance of Windrose Airlines on the Macedonian market is also extremely important in these difficult times for aviation, since it shows how crisis shifts airlines’ plans for their route networks’ expansions. Although in a crisis, Macedonian market won today, and we are thankful to Windrose for their decision. We hope that travelers from Macedonia and from the neighboring countries will find Kyiv attractive as a new destination and they will seize the opportunity to visit this beautiful city along Dnieper River, rich with culture and history, while the Ukrainians will discover the natural beauties of Macedonia. Besides the positive effect on tourism, this new route Kyiv-Skopje will enhance the business connections between the two countries, that will have an overall positive effect on the whole Macedonian economy”, stated TAV Macedonia General Manager, Metin Batak.


“Windrose Airlines hope that opening of a new route between Kyiv and Skopje will help both countries to strengthen their relationship in tourism and business sectors. We also consider that despite all difficulties we met due to world pandemic, the tourists will be interested in this brand new destination. So we wish all of us success in this challenge. We sincerely grateful for all support from North Macedonia side, from representatives of air transport authorities, airport of Skopje, Embassy of Ukraine in the Republic of North Macedonia”, stated Windrose Airlines General Director Volodymyr Kamenchuk. 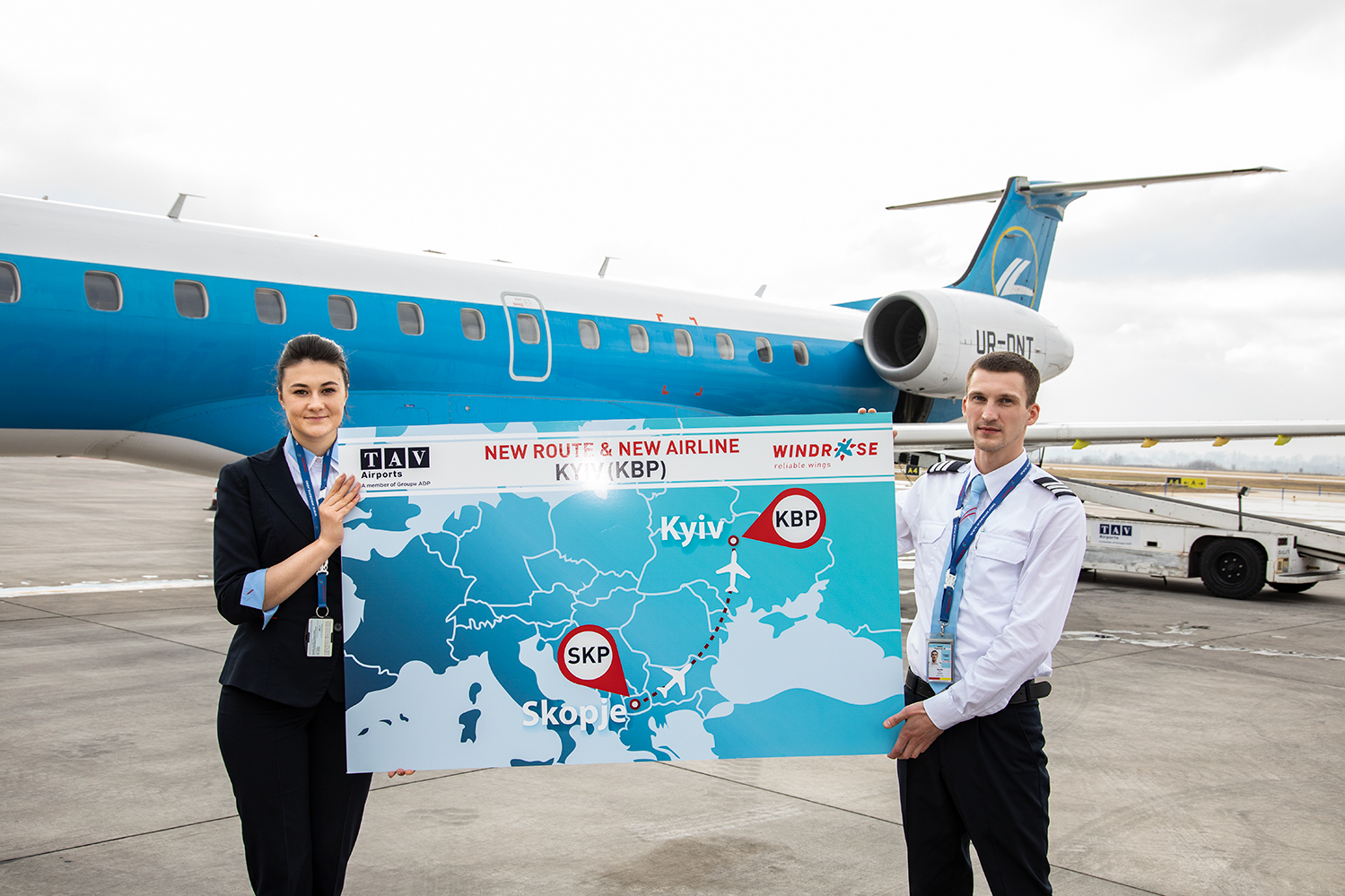 “As Embassy of Ukraine, summing up this difficult year, despite the situation with the pandemic, it is our pleasure to mark the significant enhancement of the bilateral relations. Ukraine and North Macedonia have common strategic priorities – NATO and EU membership. We look forward to the positive upwards trend of the economic cooperation. This year, despite the difficult situation with COVID-19, in 9 months we already have a higher trade exchange compared to the entire past year.  We have intensified the cooperation between the representatives of the tourism sector. Numerous tourism companies have recently visited Macedonia. The matter of organizing a visit of Macedonian companies to Ukraine is being considered. The crown of this successful year for bilateral relations is the introduction of the first in the history of our relations, direct flight on the route Kiev-Skopje-Kiev, which will increase the business relations between our countries, and the tourism in both countries, the citizens of Macedonia will have the opportunity to get acquainted with the rich culture of Ukraine and Ukrainians will be able to get better acquainted with the friendly North Macedonia. This significantly contributes to the deepening of friendly bilateral relations. We thank the Ukrainian airline Windrose for this opportunity, which in a difficult situation with the pandemic risks and moves us all forward”, stated the Ambassador of Ukraine Natalia Zadorozhnyuk.

According to the announcement from Windrose, the flights from Kyiv to Skopje are scheduled during the whole winter season, as well as for 2021 summer flights season that starts at the end of March. Reservation and sales of flights tickets is available on Windrose web page: https://windrose.aero/

Besides the fact that this is the first air route between Macedonia and Ukraine, Kyiv is also the first destination that directly connects Skopje to Eastern Europe, since the route network until now was concentrated mostly on Western and Northern Europe, as well as South of Europe, Turkey and Middle East.

TAV Macedonia finished the first 10 months of 2020 (January-October) with a 70% decrease in passenger traffic compared to the same period of 2019, while the number of flights was decreased by 59%. Since it started in March 2020, the Covid-19 global pandemic made a severe blow over the Macedonian aviation, which is the most negatively affected economic sector. The two Macedonian airports – Skopje International Airport and Ohrid St. Paul the Apostle Airport were closed for 3,5 months (March-July 2020) by the Government, as a measure for prevention and spread of Covid-19 in the country. After its reopening, on 1st July 2020, the biggest challenge for the Macedonian air traffic recovery, are the travel restrictions for the Macedonian citizens imposed by the EU countries, where over 77% of the Macedonian air traffic is concentrated.

TAV Macedonia, as an airport operator, acts in accordance with the state institutions in the countries where passengers travel, the airports border authorities and the rules and regulations of the airlines.
For travel document information and requirements by the country you want to arrive in and / or COVID tests requirements, please contact the Embassy of that country as well as the airline you will be traveling with.

- It is not mandatory for passengers to wear a face protective mask inside the terminal building of the airport, as of 3.5.2022, as per the changes and amendments in Covid-19 measures adopted by the Government of North Macedonia https://vlada.mk/node/28642. According to these changes, there is no obligation for citizens to wear a face protective mask in all closed areas, except in health institutions, pharmacies, public transportation (bus, railway, airplane, and taxi) and in institutions for care of old persons and persons with disability. Regarding the flight rules, passengers should follow the requirements of the airline with which they travel.

- Despite the existence of the online registration option, due to the new Covid-19 restrictions, passengers are obliged, upon their arrival at the airport, to register at the check-in counters, to check and verify the documents required to enter the country in which they travel, as well as to check-in their luggage.

-    Passengers will need to follow the instructions of security agents in a disciplined manner, and there, as in all procedures where queues are expected, it will be necessary to keep a physical distance of at least 1.5 meter.

Entering the terminal building of Skopje International Аirport is allowed without limitations/requirements connected to covid-19, as of 3rd May 2022 when the Government of N.Macedonia adopted the Decision (https://vlada.mk/node/28642) for lifting all covid-19 related protective measures except for wearing protective masks in certain institutions.

Due to the fact that covid-19 related requirements for different travel documents are still valid by certain countries, and which must be checked by our staff at the Check-In counters, please be informed that we strongly recommend to our passengers to arrive at the airport 3 hours before the scheduled flight.

In case you would like to perform a covid-19 test at one of the facilities by the two laboratories at the airport, please arrive at the airport earlier than 3 hours according to the required time for delivery of the test, that you should check with the adequate laboratory.

- Business and VIP lounge areas are cleaned and disinfected as prescribed by public health authorities with increased frequency based on the air traffic.

- There are available multiple self-hand sanitizers, alcohol-based with adequate signage for passengers.

- There is a self-service option with purpose all passengers to have limited contact with staff.

- The tables are cleaned / disinfected after their use.

- Plexiglas separator has been fixed in order to avoid the contact between cashier and guests.

- At each table there are alcoholic disinfectants for hands

- Тrays and plates will be removed from common areas, they’ll be given to guests by the service staff.

-  Disposable packed products are used instead of products such as salt, sugar, napkins etc.

- All the used equipment in the duty free that comes in contact with the customers, shall be disinfected frequently.

- Guiding signs for the prescribed physical distancing (1.5m) in the shop area for all present persons are placed.

- We encourage customers to use only contactless credit or debit card.

- Entrance is free for everyone. There is a Big Alcohol Based disinfectant liquid machine on the main entrance of the shop

-    Passengers should arrive at the airport at least 3 hours before their flight, as check-in counters close at least 1 hour before departure time. This means that passengers must have completed the check-in procedures at least 1 hour before take-off, and then the Passport Control and Security Checking procedures, in order to arrive on time in the boarding area, i.e., at the Gates.

Given the fact that TAV Macedonia as an airport operator is not responsible for determining and setting the rules for entry/exit into/from the country, as it is responsibility of the Border Police, which has the authority of Passport Control at airports, we would kindly ask you to contact the Ministry of Internal Affairs of R.N. Macedonia https://mvr.gov.mk/default , as well as to the Ministry of Health http://zdravstvo.gov.mk/  and the Government https://vlada.mk/ , where it is decided for these rules related to the Covid-19 pandemic.

-    You can make COVID-19 tests prior your departure at both airports through laboratories Zan Mitrev and Nikob Lab. More information available on the links below:

-    We regularly and timely apply all measures of the Government and the Ministry of Health, as competent state institutions. Of course, we also follow the experiences of other airports around the world and the recommendations of the World Health Organization (WHO), the European Union Aviation Safety Agency (EASA), the International Civil Aviation Organization (ICAO), the International Airports Council (ACI) and the International the Air Transport Association (IATA), all in order to take appropriate action in a timely manner as conditions change in this global pandemic.

To ensure the best service on this website we use cookies to analyse the behavior of our users. E.g. what language your browsers uses, what device you use to visit this site or how often you visit this website. By clicking OK you agree to our usage of cookies and webtracking tools (e.g. Google analytics)', copyrightText: 'All rights reserved. © TAV Technologies